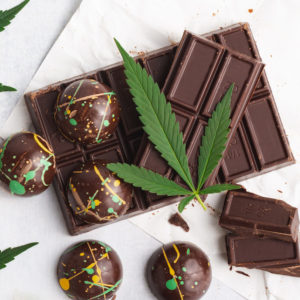 Cannabis lore and cinematic depictions often put a spotlight on the “pot brownie.” However, today’s cannabis enthusiast has a variety of cannabis edibles at their disposal for recreational and medicinal effect.(1)

Many types of food products can be cannabis edibles. Just about any solid food or beverage can be infused with THC. Edibles may deliver a longer, hard-hitting effect versus that of smoking.(2) Therefore, it’s sometimes preferred depending on one’s scenario.

Producers and manufacturers get ever more crafty in offering an array of foods and drinks to cannabis enthusiasts. Some of the most popular types of cannabis edibles:

Cannabis edibles are most often made with a fat-based substance – butter or oil – and are infused with a cannabis distillate, which is odorless and flavorless, or cannabinoids. These ingredients must bond to the fat in order to be effective, so infusing them in the edible with butter or oil is typically more effective than using ground flower alone. Cannabinoids can also be made at home using ground flower instead of dispensary-grade distillates.

Most associate cannabis with the act of smoking. So, why have edibles entered the conversation? Well, enthusiasts give edibles the nod over smoking flower or vaping for a number of reasons. Firstly, edibles often offer longer-lasting effects. Why hit your bowl every hour when you can just eat a brownie and feel good for most of the waking day?

Secondly, edibles offer higher concentrations, hence the longer lasting effects. So, you’re getting a stronger punch of THC that lasts longer when you choose a cannabis edible. If you’re looking for an intense high or someone with a high tolerance, edibles may be your new bestie.

Lastly, edibles are way more covert. You can easily and inconspicuously pop a brownie or gummy in your mouth. But, you’ll get a different vibe from onlookers if you take out a bong. Moreover, there’s no residue with edibles. Smoking leaves an odor behind and vaping leaves a lingering trail of vapor. Yet, eating an edible is more of a one and (ho harm) done operation.

Because the effects of edibles take a longer time to appear than smoking marijuana, it is easy to consume more than you intended without realizing it. Research has shown that an unexpected consequence of this delayed effect is that people who consume edibles are more likely to experience an overdose and be taken to the emergency room than those who smoke marijuana.

Since the mid-19th century, marijuana has been used in a wide variety of cooking recipes, including fudge and brownies. However, early 20th century lawmakers in the United States and many European countries began to outlaw the drug as a dangerous substance that could cause insanity. It was not until the late 1960s and early 1970s that people began to experiment with marijuana more widely; consequently, pot brownies became a popular treat during this time period.

As attitudes toward marijuana have changed, so have attitudes toward the drug itself. As research on its medical uses continues to mount, marijuana’s stigma is being shed more quickly than ever before. Once considered an illicit substance under federal government guidelines, it is now a drug that is still deemed illegal under federal guidelines but will likely be coming to a state near you soon.

How Much Should I Try?

There’s no reason to be reluctant if you’re thinking objectively. You wouldn’t suggest shots to someone if it’s their first time drinking alcohol; you might start them off with a beer and see how they feel. Use the same logic. Start slow and assess how you’re feeling. There’s always time to take more, but you can’t reverse the effects of edibles once taken.

How Long Will It Take To Feel It?

Cannabis edibles need to filter through the digestive system. So, there’s no immediate effect as with vaping or smoking. However, after about an hour, you should be feeling the full effects. Some softer candies, ingested in part sublingually, may kick-in quicker.(4) But, most agree that you’ll experience the initial to full effects between the first 30 to 90 minutes.

How Long Do the Effects of Cannabis Edibles Last?

The duration relies on a number of factors, such as potency, dosage, and your own metabolism rate.(5) It’s commonly accepted that smoking or vaping offers about four hours of effect. But, edibles offer a longer experience of up to six to eight hours per dose.

Of course, you’ll need to factor-in your tolerance; for, someone who smokes often may feel a weaker effect from an edible versus someone who has never tried any form of cannabis.

Does a Cannabis Edible Taste Bad? (Like a Plant?)

Taste is a relative experience. However, expect that manufacturers are doing their best to make edibles great tasting as well as recreationally/medicinally sound. Taste could depend on individual product or preference.

For example, the taste of chocolate may take precedence in regards to a brownie. But, a gummy may have more of a “cannabis” taste to it. It’s likely best to have a discussion with reps at your local dispensary. Ask them to provide you with feedback and reviews of cannabis edibles.