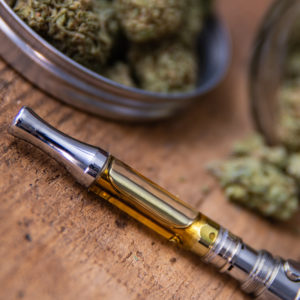 Vape carts come in many different varieties. The most common include a distillate or a CO2 hash oil, which are then mixed with a thinner to vape properly. Since THC vape carts can also be filled with vape juice, you may know that vape juice usually refers to the nicotine-containing e-liquid used with e-cigarettes.

However, ever since cannabis vaporizers came onto the scene, the term “vape juice” has expanded its scope. In the context of cannabis products, vape juice contains cannabinoids. The base of vape juice is either propylene glycol (PG) or vegetable glycerin (VG), and a THC concentrate.

Conduction involves contact between two surfaces. So, think of boiling an egg; the heat of the pan’s surface heats the egg. Using a piece of hardware fitted with conduction heating means that your cannabis product will come in contact with some kind of heating coil, plate, etc.

A convection style device does not come in contact with your cannabis product. Rather, it heats the air around the product to the point that terpenes and cannabinoids are released and make a vapor. There are pros and cons to each kind of hardware. However, people celebrate convection heating for delivering a tastier hit.

What Happens When You Vape Cannabis?

Vaping involves inhaling plant compounds called cannabinoids (THC and CBD are just two examples of such) and terpenes (natural oils). When a piece of hardware heats cannabis oil or concentrate, cannabinoids and terpenes are released, creating a vapor.

The vaporized cannabinoids and terpenes are responsible for the effect. THC creates the sense of well-being and sought-after “high.” CBD is known to deliver relief to pain and muscle tension. Speak to your local dispensary representative about different strains and terpene profiles.(2)

There is some concern that vaping may not be as healthy as others claim. One major issue with the cannabis concentrate used in vaping cartridges is the chemicals used during extraction and the thinning process. Raw cannabis oil in its natural state is much too thick and viscous to be suitable for consuming, so thinning agents need to be added during preparation.

In 1989, High Times, a publication advocating for the legalization of marijuana and other countercultural ideas, published detailed instructions for transforming easily obtained parts into a low-cost vaporizer, along with a guide to making a highly potent cannabis concentrate to use with the vaporizer. The process involved brushing the concentrate or oil onto a lightbulb thread, which served as the heating element. Five years later, Eagle Bill invented the Shake & Vape, the first publicly available vaporizer. The device gained popularity when Bill attended the 1993 Cannabis Cup in Amsterdam following its invention. Attendees were blown away .

The cannabis market is booming. Vaping devices increasingly resemble USB drives and smart devices. The form, function, and quality of these devices are more varied than ever before. Many companies are switching over to pre-filled cartridges of cannabis extract or oil in order to provide a safer, more enjoyable experience for their customers; as research continues on the health benefits of marijuana, the interest from investors will continue to rise as well.

Pens are a popular type of hardware for vaping. Pens can be disposable (you throw them away after oil is done) or meant to recharge and reuse. Pens are a no fuss option and might be the best option for those who are new to vaping cannabis. Pens can be used to vape THC, CBD, or a mixture of both.

It needs to be understood that pens can be used to heat and ingest cannabis oil as well as forms of cannabis concentrate. Often, the battery and pen itself is much smaller if the product is only used for oil.

While many enthusiasts like (disposable) pens for convenience, pods are seen as a bit more robust and designed for longevity. The product houses a rechargeable battery. A separate area houses cannabis oil or concentrate.